The world is transforming — so are our students

How can universities prepare students for the careers, professions and jobs that have not yet been invented?

The event is relevant for teachers, parents and senior school students.

Educators constantly hear from our industry partners and future graduate employers that there are new and emerging jobs that require new types of skills not provided by most existing degrees. Future employers seek graduates with the capability to be at the forefront of change and who are excited about the opportunities provided by rapid transformation. Rather than being frightened about disappearing or changing jobs, students entering university will need to be equipped to ride the wave of change rather than be afraid of it. COVID-19 has further demonstrated this need for better equipped graduates. Bond University recognised that, to lead the way with forward thinking programs that equip our graduates for this world of change, we needed to employ modern more flexible ways of thinking and doing. Using a systems design approach and working directly with industry partners in an interdisciplinary setting, the University has created initiatives and programs that ensure Bond graduates are sought after by employers. Working on real problems and learning in authentic work-place settings are key aspects of the new approach. Professor Dunstan will explain how Bond is challenging the traditional model for higher education, driving it into new, forward thinking territory. She will explain how the University is breaking down the silos to work across Faculties to achieve a truly transdisciplinary approach to curriculum development.

Education…but not as we know it.

Professor Dunstan is the Deputy Vice Chancellor (Academic) at Bond University. In this role she oversees the implementation of the research, learning and teaching strategies of the University. Her role also encompasses the Bond University College preparation and pathway programs. She has been Chair of the Bond University Women’s Network since 2014 and was the Chair of Academic Senate 2012 -2016. Her first appointment at Bond was as Head of the School of Business in 2009.

Prior to her appointment at Bond she was a Commissioner of the New Zealand Securities Commission 2003-2011. In 2005, she was appointed as a member of the New Zealand Securities Commission Audit Committee and was the Chairman of this committee from 2008 until 2011. Keitha has also held several senior positions at Victoria University of Wellington in New Zealand 2000 – 2009, including Head of Accounting and Commercial Law and was founding Director of the Centre for Accounting, Governance and Taxation Research. 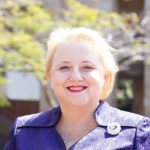 The world is transforming — so are our students